Motorola is aiming to shake up the high-end handset market with its reasonably priced — £399.99 (inc. VAT) in the UK (~$545) — Moto G200 5G. With the high-end Snapdragon 888+ 5G Mobile Platform at its heart, the Moto G200 includes two 5G SIM slots and a high-capacity battery, while the screen is large and offers a rapid 144Hz refresh rate. There’s plenty to like, so what are the drawbacks?

The Moto G200 is currently available in the UK and Europe, and will launch in Latin America, but no plans have yet been announced for the US or Australia. 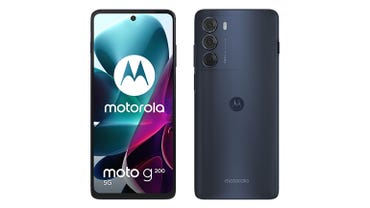 The build is the usual Moto plastic, but the backplate still looks rather good. It has a nice opaque sheen and an original and very smart moulding around the triple camera array. The camera lenses protrude significantly, and a pair of curved, horizontal lips around them take advantage of that fact with a clever design feature. Unfortunately, these lips don’t stop the handset wobbling around on a desk when the screen is tapped; they are also completely hidden by the chunky see-through bumper that comes fixed onto the phone in its box. If Motorola could develop its backplate design idea and use metal, the bumper could be ditched, and the handset’s back could be a real talking point. But of course, the handset would then be more expensive.

My review phone was Stellar Blue – which looks rather more like lavender in some lighting conditions. There is also a Glacier Green option.

The screen is very large, measuring 6.8 inches across the diagonal. The handset itself is 75.53mm wide by 168.07mm deep by 8.89mm thick and weighs 202g – and that’s before the chunky bumper is considered. So this is a phone that many people will struggle to use one-handed, and it’s likely to be too big for some pockets. The Moto G200 has an IP rating for dust and water resistance, but it’s only IP52, which signifies that it’s ‘dust protected’ and can cope with ‘dripping water’.

The fingerprint sensor is integrated in the power button on the right side, next to the volume rocker. On the left edge you’ll find a Google Assistant button. There’s no 3.5mm headphone jack.

The high-end Snapdragon 888+ chipset is supported by 8GB of RAM, which explains why I wasn’t bothered by any stuttering or delays when using the handset. The 128GB of internal storage was reduced to 112GB by the combination of Android 11 and a few Motorola bits and pieces. There’s no bloatware here though, which is welcome – especially as there’s no MicroSD card slot to add more storage.

The Moto G200 has a large 5000mAh battery, which dropped from full to 82% during a three-hour viewing of YouTube video. That equates to battery life of around 17 hours, which is impressive, and anecdotally I found I got over a day in general use – not far off the ‘up to 1.5 days’ claimed by Motorola. Charging (33W) was fast: in one session the handset went from 11% to 42% after 15 minutes, reaching 88% after 45 minutes. There’s no support for wireless charging.

I found the Moto G200 to be a good phone for the price. With a large, high-quality screen, a high-end processor, good battery life and no bloatware it looks like a good choice for anyone seeking a competent mainstream 5G handset. The stylish backplate will be hidden by the provided bumper’s protection, which is a shame, but generally, in terms of ‘bang for buck’, the Moto G200 is impressive.

Motorola not yet ‘ready’ for Lenovo’s Project Unity future