The Portage Lake Bridge is being recognized as one of the most significant historic
civil engineering works in the country thanks to three Michigan Tech researchers.

The American Society of Civil Engineers (ASCE) will dedicate the Portage Lake Bridge as a National Historic Civil Engineering Landmark at 10 a.m. Friday, June 17, in
a ceremony at Houghton’s Bridgeview Park. The public is invited.

“The lift bridge,” as it’s regionally known, links Houghton and Hancock and is the
only structure spanning the Keweenaw Waterway. At 4,584,000 pounds, built with more
than 35,000 tons of concrete and 7,000 tons of steel, the bridge was the heaviest
double-decked vertical-lift span in the world at the time of its construction in 1959.
It was also the first bridge in the United States to use an intermediate lift span
position.

Officially named a State Historic Landmark in summer 2019, the lift bridge was recognized
as an ASCE National Historic Civil Engineering Landmark later that year thanks to
the efforts of Tess Ahlborn, professor of civil, environmental, and geospatial engineering at Michigan Technological
University, and two of her former students: Michael Prast ’19 and Emma Beachy ’19.
The public dedication and celebration were delayed due to COVID-19.

Months of Husky Research Behind the Dedication

The trio of Ahlborn, Prast and Beachy submitted the required 300-page application
to obtain the ASCE designation. Prast is now a timber structural engineer at Fire
Tower Engineered Timber in Calumet, Michigan, and Beachy is a design engineer at Corbin
Consulting in Beaverton, Oregon. Both earned their bachelor’s and master’s degrees
in civil engineering at Michigan Tech, completing their degrees in 2019.

“I mentioned the topic of national historic landmarks during Bridge Design class and
let the class know I would be delighted if someone wanted to work on a nomination
application for the Portage Lake Lift Bridge,” said Ahlborn. “It didn’t take long
for Emma and Michael to speak up, and the rest is history. I can’t thank them enough
for taking on this project and seeing it through the application process.”

Prast and Beachy started preparing the application in spring 2019. It took them about
four months to gather all the required information.

“We had to prove the historical significance of the Portage Lake Bridge and describe its unique features,” said Prast. “We also had to show what the building
of this bridge did to elevate the civil engineering profession — as well as its social
and economic impact on the region and the nation.”

The Portage Lake Bridge took its name from the bridges that came before it. Like them,
it was crucial in helping facilitate the transport of copper, timber and other raw
materials during the region’s industrial heyday. But Beachy said the continued importance
of the lift bridge is unique.

“Most of the bridges of this type — because they’re so old — are mostly converted
into either pedestrian or bike bridges, or just demolished entirely,” she said. “In
contrast, the Portage Lake Bridge is really well maintained. It also has a really
high level of use. Not only in comparison to other vertical lift bridges, but also
just in comparison to other notable Michigan bridges, like the Mackinac, the Blue
Water, and the International Bridge.”

“Today, we have a very active tourism industry,” Prast added. “Especially in the summer,
traffic on the lift bridge increases quite significantly. In the winter, when the
lower deck is used for snowmobiles, it makes it a much safer crossing for everyone
involved.” 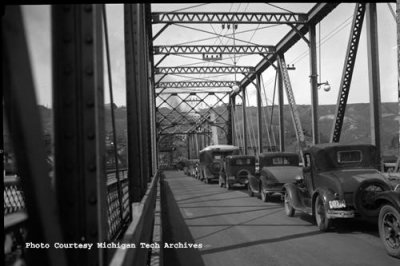 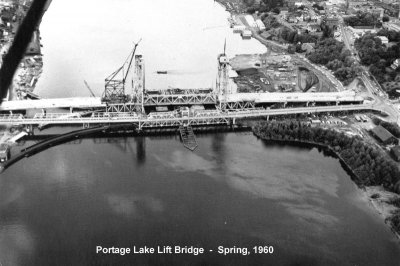 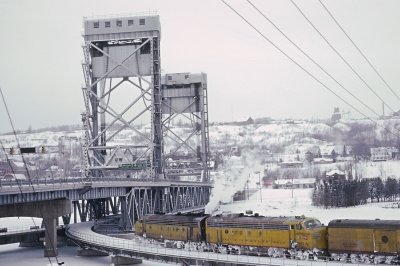 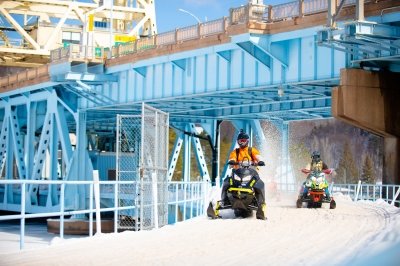 The lower deck of the lift bridge is now used by snowmobiles in winter (Image: Peter
Zhu)

Spanning the Canal Before the Lift Bridge

Some of the earliest crossings across Portage Canal included a ferry service and a
floating gondola-style bridge, said Prast. “In the 1870s citizens created a wooden swing bridge. It had only one deck originally, for animal carts and pedestrians. In 1892 it was
adapted for rail.”

The swing bridge allowed pedestrians, cars and trains to cross. Its center span rotated
to open the waterway to boats passing through.

Fun and free for the whole family, Bridgefest was organized to celebrate the Portage
Lake Bridge, a vital link between the communities of Houghton and Hancock, and the
gateway to the rest of the historic Keweenaw Peninsula. Learn more at bridgefestfun.com.

Replacement was inevitable for a lot of reasons, said Prast. “It was structurally
deficient. The foundations were falling apart. They had to dredge so that larger boats
had enough depth to come through — but that affected the foundation and the whole
swing bridge would tilt to one side. This caused them to have to shave off parts of
one side of the swing bridge and add to the other side.

“Rotting timbers and concrete fell down onto the decks below. They would have to spray
the bridge with water on really hot days, because otherwise steel would expand and
the bridge would get stuck. As vehicles became larger in size, it got to the point
that any time a truck came across the swing bridge, including a snow plow, they had
to stop road traffic from both directions. The bigger trucks needed both lanes to
get over the bridge. And the swing bridge was required to open for all boats. It was
so close to the water level that even a modest pleasure boat couldn’t pass under.”

The People Behind the Portage Lake Bridge

Beachy and Prast dug into documentation that traced the bridge from conception to
construction. “C.F. Winkler, the Houghton County road commissioner from 1932 to 1964,
wrote letters and contacted all the senators, the U.S. Army Corps of Engineers and
the Michigan State Highway Commission — all the people who needed to know that the
old swing bridge was not working anymore and that it wasn’t safe,” said Beachy.

After over a decade of effort to get the project underway, the construction of the
Portage Lake Bridge had a chilly start on Dec. 18, 1957. Construction of the lift
bridge took place from 1957 to 1959, year-round through the Keweenaw’s harsh winters.

“John Michels was key on the construction end of things, along with Tony Gilroy,”
said Prast. “They were construction managers on the project for the Michigan Department
of Transportation, and they took a lot of photographs during that time and compiled
it all into a really comprehensive construction history report. John was able to share
that with us, along with plenty of other pictures and newspaper clippings that were
super helpful for this nomination package.”

Tom D’Arcy, who worked as a design engineer for the Chicago firm Hazelet and Erdal,
also supplied essential information for the application. “We were able to get his
take on what made this bridge really unique and interesting from a design perspective,”
Beachy said. “That was really helpful for the National Historic Landmark nomination
package.”

The design of the lift bridge accommodated three transportation modes that converged
in Houghton and Hancock on either side of the Portage Canal: automobile, rail and
water vessels. To address this, engineers came up with an innovative solution: a double-deck
lift bridge with an intermediate raised position. While the top and bottom lift span
decks are primarily designed to carry vehicle and rail traffic, respectively, the
lower deck, when raised to street level, allows vehicles to drive across it while small to medium boats pass under the bridge.

For the ASCE application, Prast and Beachy researched bridges across the country to
make the case that these features made Portage Lake Bridge unique among double-deck
bridges. “In our research, we weren’t able to find many other double-deck bridges
in the U.S. designed with an intermediate position,” Prast said. “The intermediate position allows the bridge to let its two busiest modes of transportation
cross uninterrupted at the same time. This immediately reduced openings by 63%.

Lift bridge construction incorporated numerous industry advancements. “First off,
the lower lift span deck needed to be usable by both automobiles and rail,” Beachy
said. “They didn’t have access to a lot of the fancy materials and products used nowadays,
so the design team experimented with a couple different things that would allow them
to properly embed the train rails within the driving surface on the lower deck.”

This multi-use deck surface needed to carry heavy loads on both decks concurrently.
The design team was tasked with supporting what was then the heaviest lift span in
the world: 4,584,000 pounds spanning 260 feet. “They came up with these really neat
movable intermediate supports for the span,” Beachy said. “When the lift span is fully
down, it rests on the piers of the bridge, right on these relatively small pieces
of metal called bridge seats. And the lift span is not relying on any of the mechanical
equipment or the cables or the towers or anything. It’s just sitting.”

A similar process happens when the bridge is in its intermediate position, Beachy
explained. Because fixed bridge seats would get in the way of the lift moving up and
down, the design team came up with the idea of using large beams located at each corner
of the towers, pushed out with hydraulic rollers. “When the lift bridge is put into
the intermediate position, that system raises it up just a little bit higher than
the roadway,” she said. “The rollers push out the bridge seats on giant beams and
then they set the lift span back down on top of them. What’s really cool is that if
you just walk underneath the bridge, you can go see the rollers, and see how massive
they are to hold up that really heavy lift span.”

On Saturday, June 18, at 10 a.m., Prast and Beachy will kick off a presentation titled
“Going Up Since 1959: History of the Portage Crossing and Lift Bridge Construction.”
Following their discussion of everything that made the lift bridge worthy of its designation,
Kris Mattila, MTU engineering professor, will talk about how the bridge was built
and show photographs from throughout its construction. Both presentations are open
to the public and will be held in Martha Wiljanen Community Hall at the Finnish American
Heritage Museum in Hancock.

Michigan Technological University is a public research university founded in 1885 in Houghton, Michigan, and is home to more than 7,000 students from 55 countries around the world. Consistently ranked among the best universities in the country for return on investment, the University offers more than 125 undergraduate and graduate degree programs in science and technology, engineering, computing, forestry, business and economics, health professions, humanities, mathematics, social sciences, and the arts. The rural campus is situated just miles from Lake Superior in Michigan’s Upper Peninsula, offering year-round opportunities for outdoor adventure.