Sony’s 6.1-inch Xperia 5 III, which costs £899 (inc. VAT) in the UK or $999.99 in the US, is a smaller, more hand-friendly alternative to the flagship 6.5-inch Xperia 1 III. The two handsets share many key characteristics, including a 21:9 screen aspect ratio, which is something of a speciality for Sony phones. The Xperia 5 III has been on sale in the UK for a while but has only just reached the US.

It’s unusual to find a high-end phone that’s comfortable in the hand, but that’s precisely what the 168g Xperia 5 III is. Measurements of just 68mm wide by 157 deep by 8.2mm thick mean that even I can reach right across the screen one-handed, although the smooth, shiny, reflective Gorilla Glass 6 back makes the phone somewhat slippery to hang onto. 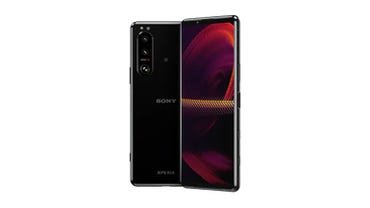 If you find the screen a stretch, Sony’s Side Sense add-on – a slide-out miniature menu – is there to help. Double-tap a barely visible bar on the right edge of the screen and a user-configurable set of shortcuts pops up, making it quick and easy to switch between commonly used apps. Side Sense can also call up the split screen feature that Sony calls Multi-Window. I didn’t find splitting the screen on this handset all that useful because of its moderate size, but it’s a faithful copy of what’s on the larger Xperia 1 III.

Like its sibling, the Xperia 5 III has IP65/68 dust and water resistance, and for wired headset fans there’s a 3.5mm jack. The left edge has a SIM caddy that, as on other Sony handsets, needs just a fingernail for extraction rather than the usual pointy dongle or bent paperclip. The handset can accommodate either two SIMs (one of which can be 5G), or a SIM and a MicroSD card for storage expansion. There’s a Google Assistant button on the right side, along with the volume rocker, a power button with integrated fingerprint sensor, and a button that launches the camera app and then acts as a shutter. The latter is very useful for taking quick snaps.

The OLED screen measures 6.1 inches across the diagonal and adopts the tall, narrow format that’s characteristic of Sony handsets: the 21:9 aspect ratio and 120Hz refresh rate are particularly suited to video watching. The resolution is 1,080 by 2,520 pixels (449ppi), in contrast to the flagship Xperia 1 III, which delivers up to 1,644 by 3,840 (643ppi). Still, the Xperia 5 III’s screen supports 100% of the DCI-P3 colour gamut, and there are several user-definable settings that affect colour reproduction.

The only slight annoyance is that the refresh rate doesn’t dynamically adjust, although setting it to 120Hz and leaving it there is no hardship. I found myself less inclined to watch video on the Xperia 5 III than I had been on the Xperia 1 III, but the smaller screen is the trade-off for an easier hold and a lower price. When I did view video, I found the audio to be very good.

The Xperia 5 III is powered by Qualcomm’s Snapdragon 888 5G Mobile Platform with 8GB of RAM. The phone performed well in everyday use with no stuttering or sluggishness, as you’d expect from a high-end chipset. There is 128GB of internal storage; accepting all the optional installs consumed 33GB, leaving 95GB free.

The front-facing 8MP f/2.0 camera sits outside the screen in the top bezel, so that its presence doesn’t detract from video viewing or other screen uses. The screen-to-body ratio is a moderate 81.3%.

Android 11 is accompanied by Sony tweaks like Side Sense and additional software, much of which can be deselected at start-up. The 4500mAh battery lasted for nearly 16 hours under the PCMark for Android battery rundown test, and Sony’s claim of half an hour to charge the battery to 50% feels accurate to me. There’s no wireless charging here, in contrast to the Xperia 1 III.

The Xperia 5 III is a well-specified phone with a price tag to match. However, given that video viewing and photography using its 21:9 screen is a major selling point, you might be tempted to pay a bit more for the flagship Xperia 1 III with its larger, high-resolution screen.

Sony Xperia 10 III review: A solid mid-range 5G phone with a 21:9 screen and good battery life, but the price is high

The Technology Behind Streaming Videos