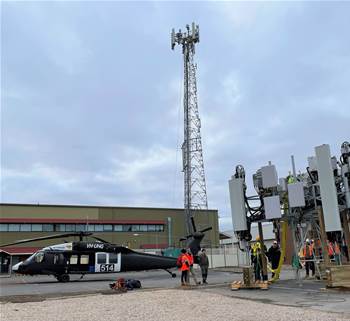 TPG Telecom made use of an ex-US armed service Blackhawk helicopter to switch the head of a 4G cellular tower in South Australia with a new 5G tower head weighing 2.7 tonnes.

The telco reported in a LinkedIn post that it made use of the helicopter – “named ‘Patches’ (thanks to its still to be repainted exterior)” – because of to the site’s limited accessibility.

“The tower’s area intended the only entry issue to replace the tower head was through a carpark, which was not ready to guidance a 300-tonne crane,” the telco wrote.

It added that air traffic experienced “to be redirected all-around the site thanks to its proximity to Adelaide airport” for the duration of the substitution operation, which occurred previous Sunday in Thebarton.

The challenge also concerned a crew of seven riggers and was run in conjunction with Nokia and Apex Conversation Systems.

The telco reported the chopper-aided tower head alternative was an case in point of “the ground breaking contemplating shown by our devoted Industry Ops team” as TPG Telecom proceeds to increase its 5G network.